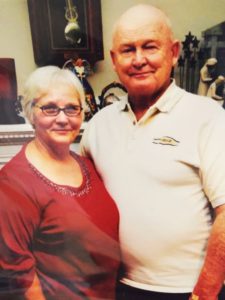 A Lafayette, Ind., woman visiting Mexico had to have two emergency heart surgeries. Now a Cancun hospital won’t release her until she pays a $40,000 bill. U.S. officials have warned travelers about hospital scams in Mexico. (Dwight Adams/IndyStar) Wochit

Editor’s note: The Journal & Courier reached out to Amerimed Cancún Hospital on Wednesday for comment. An employee confirmed only that Dixie Stinson was a patient. No one was immediately available to answer questions about the Stinsons’ claims.

LAFAYETTE, Ind. — Lafayette couple Mo and Dixie Stinson were traveling in Cancún, Mexico, for their granddaughter’s wedding when Dixie Stinson began having trouble breathing. When she collapsed and lost consciousness on Monday, she was transported to Amerimed Cancún Hospital, a private facility on the outskirts of Cancún.

Dixie Stinson was treated for a 99 percent blockage of an artery in her heart but not before the family was forced by the hospital to pay $25,000 upfront, according to Dustin Richardson, the Stinsons’s son-in-law. After the first operation, another blockage was discovered. Again, the hospital demanded a $30,000 payment before operating. Both operations were successful and Dixie Stinson is recovering, surrounded by her daughter and husband, who formerly owned Mo’s Auto Sales in Dayton.

Now, however, the hospital refuses to release her mother, Mary Richardson said.

Hospital administrators demanded $40,000 upfront on Wednesday before agreeing to release Dixie Stinson. If the funds weren’t found, administrators threatened to call authorities and have Mo Stinson arrested, according to Mary Richardson. As of Thursday evening, he said the hospital informed him that the bill had climbed to $53,000. Although the couple has Medicare and AARP insurance, Mo Stinson said the hospital would not accept either.

“I just don’t know what to do. They don’t seem to care about someone from other countries,” Mary Richardson said.

A spokesperson for the American Consulate in Mérida, Mexico, said that by law the family cannot be arrested.

“Mexican hospitals cannot stop anyone from leaving a hospital if the financial debt has not been covered completely. They may inform the person the debt needs to be cleared, however, what we have seen in past experience is that they let the customers go,” the spokesperson said. “Should the customer be forced to pay the debt, we normally refer them to the local police. This is the standard procedure.”

Going to the police may not be a viable option for the family. During their stay at the hospital, Richardson said they witnessed the hospital call the police on a woman who could not pay the bill for her son’s terminal cancer treatments.

Mary Richardson said she did not know how they would find the funds, and as long as her mother remains in the hospital, that number continues to climb.

“I have my Chase debit card and other family members have their credit cards, which they have already maxed out. … I am really concerned that they will take my father, Mo Stinson, to jail because he doesn’t have the money for the balance he signed for,” Mary Richardson said.

Hospital scams targeting tourists are not uncommon in Mexico, especially in places that attract international clientele. The United States State Department issued a warning in May regarding hospital scams and provided a list of sanctioned medical facilities for those traveling abroad in Mexico. Amerimed Cancún Hospital is not on this list.

Amerimed Hospitales, in fact, is a chain of private hospitals throughout Mexico. Two Amerimed branches in the Los Cabos area were closed down by Mexican officials in April due to “repeated reports of predatory business practices and billing,” according to the State Department’s website.

The family has started a GoFundMe page to help raise money. But with maxed out credit cards and several failed wire transfers, Mary Richardson said she is not sure what her family is going to do next.

The Stinson’s granddaughter was married Thursday afternoon. Dixie Stinson, of course, was not able to attend.

“My granddaughter is going to come visit after in her wedding dress,” Mo Stinson said.

How you can help

Donate to the Stinson’s GoFundMe campaign at https://www.gofundme.com/2hpptdw.

Go back to the blog